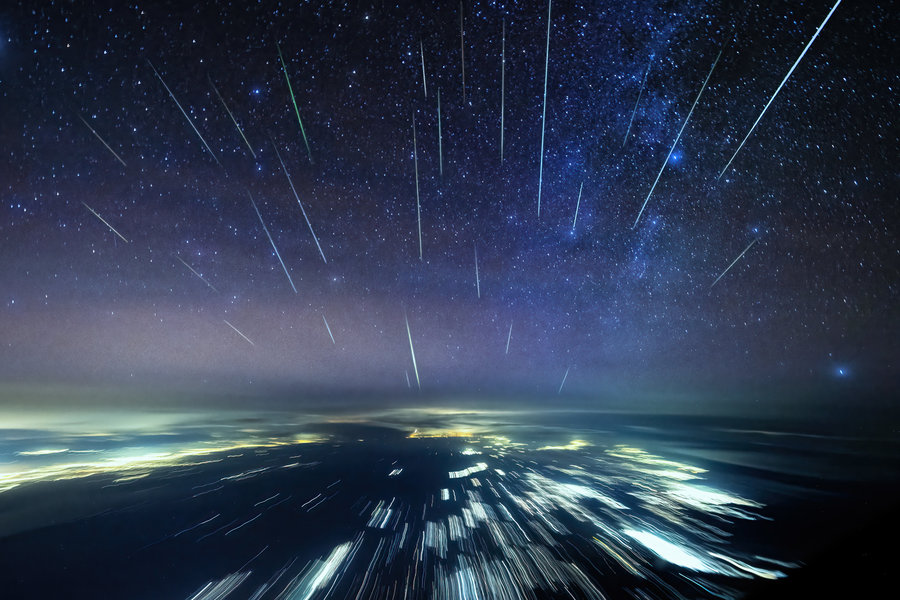 We stopped counting all the shooting stars after an hour or so: it was just a never-ending show of white, orange and green streaks across the sky. Some leaving bright and fumy contrails during their 3-second burn, others gone in less than a second. So beautiful.
Particles and rocks that are all debris of the '3200 Paethon' astroid that somehow lost a lot of it's mass orbiting the Sun during it's 1,5 'Earth year' orbits.

It is already amazing to behold for two 21st century pilots in their 747, knowing so much about the solar system and our universe. But I can only imagine the true reverence people must have felt in the ancient days of history.
Presumably unaware of the greater picture we're part of, what were they thinking while observing these things? Fear? Awe?

Oh how I would love to take a DeLorean time-machine, visit those older civilisations and learn about their ways and perspectives of life and the universe. I would not be surprised we could actually learn a thing or two from them right now, provided I manage to conceal the car and convincingly pose and speak their language of course.
Makes up for a potential movie, I guess.

Anyway, this image is a stacked result, using the Nikon Z7 and 14-24mm f/2.8G ED lens, taking 30-second exposures for nearly five hours straight with 30-second exposures.
I've manually selected and cropped all the trails in each image, blending them in one of the long-exposure shots taken while flying over Azerbaijan.