All prints are produced by a Hahnemühle Certified Studio in the Netherlands.

Each comes with an official Hahnemühle Certificate Of Authenticity, signed and numbered by me personally.

Every print comes with a white margin on all sides, allowing custom framing options to your own liking.

The unique and exclusive JPC-frame is optional, making it a true piece of art.

All prints are made to order, meaning the production starts after the order has been placed.

Time between order and shipment is usually between five and ten working days for prints, up to four weeks for print with exclusive frame. 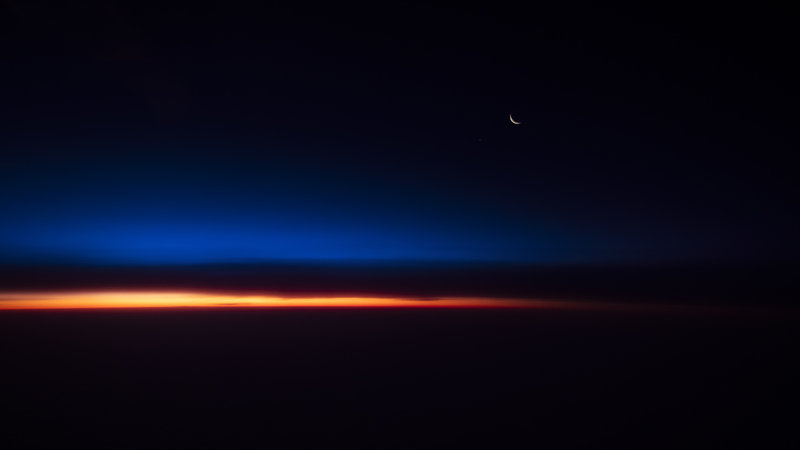 The art of simplicity can be seen in the complexity of the universe.

It's so simple; a horizontal orange line, a black horizontal line and a fading blue line in the middle of the photo. Blackness dominates the rest of the frame, with the exception of a tiny crescent Moon in the upper right area with (at least in the high-res image visible) planet Venus dimly visible to the lower left of the Moon. Pretty uncomplicated, right? Simplicity can be deceiving though.
In reality, I'm blown away by the depth and intricate physics that lay behind this view. Orbital mechanics dictate the movements of 4 celestial bodies in this shot; The Earth, the Moon orbiting the Earth, planet Venus and ultimately the Sun as a gravitational center. She dictates the movements that make the planets and their moons move around for billions of years like the intricate parts of a gigantic clockwork. And for this shot a couple of those bodies were at exactly the right position to make it a piece of natural art.
Light from planet Venus was reflected from her cloudy atmosphere back into the vacuum of space to find his way to the sensor of my camera and eyes after a few minutes. Light reflected from the crescent Lunar surface bounced off its cratered surface and arrived 1,25 seconds later in my viewfinder.
The only light that arrives pretty much directly is from the rising Sun. Scattered, dispersed and refracted by the Earth's atmosphere that works like a giant prism, it shows all the colours of the spectrum in a brilliance that will soon be blinding for the human eye this high up in the atmosphere.

More of the Moon

Island in the Sky Collection