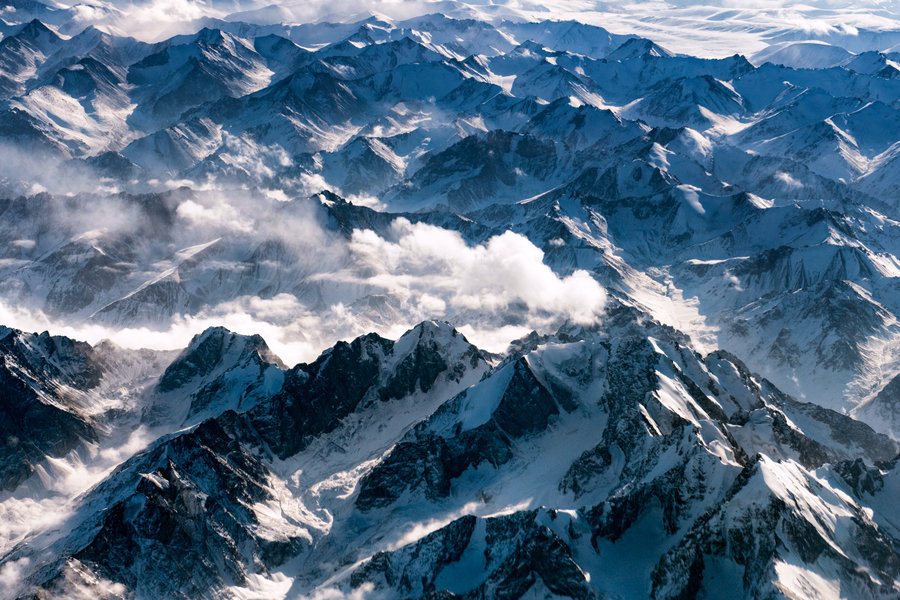 I used to have a globe with a lightbulb inside that stood next to my bed when I was a young boy. Before going to bed, I would let my eyes wander over distant countries and remote islands with strange and exotic names. The sea-currents, mountains.. there was so much to see and know about the world out there.

One of those fascinating spots on my globe that often caught my eye was the large brown patch that dominated the middle of the Asian continent.

The Himalaya mountains; the natural boundary between India towards the south and China and some other exotic countries that did not ring a bell in those days.
Fast forward to today, I find myself overflying the northern part of that mountain range on a regular basis. Behind me a plane load full of clothing, electronics and whatever else needs to be carried across the world from China to Europe and beyond my windows the inhospitable peaks for as far as the eye can see, most of them probably never visited or seen from the ground.
I guess no one in Europe will later imagine their ‘made in China’ goods have crossed those mountains with me.

I came across that same old globe again, just a few months ago. I blew away some dust from the surface and saw the same fascinating countries and landscapes again. This time with the surreal knowledge that I have seen most of those places with my own eyes by now.
I turn the globe slowly around and I see the familiar state of Alaska passing under my hands; one of my most beloved places in the world and ironically enough also one of the places where aviation so nearly cost me my life.

Was my drive to see those places born with that globe when I was 5-6 years old? Was the fascination for flying coded in my genes since conception or did a completely random event trigger that in my impressionable developing brain?

The nurture vs nature debate will probably never be settled, but I guess it is a combination of both.
I'm just glad that everything happened exactly the way it did. From the chance-encounters and events that pushed me into this life, together with the negative moments and people that helped me shape into who I am today.
Let's see where this adventure of a lifetime is heading to in the coming year.