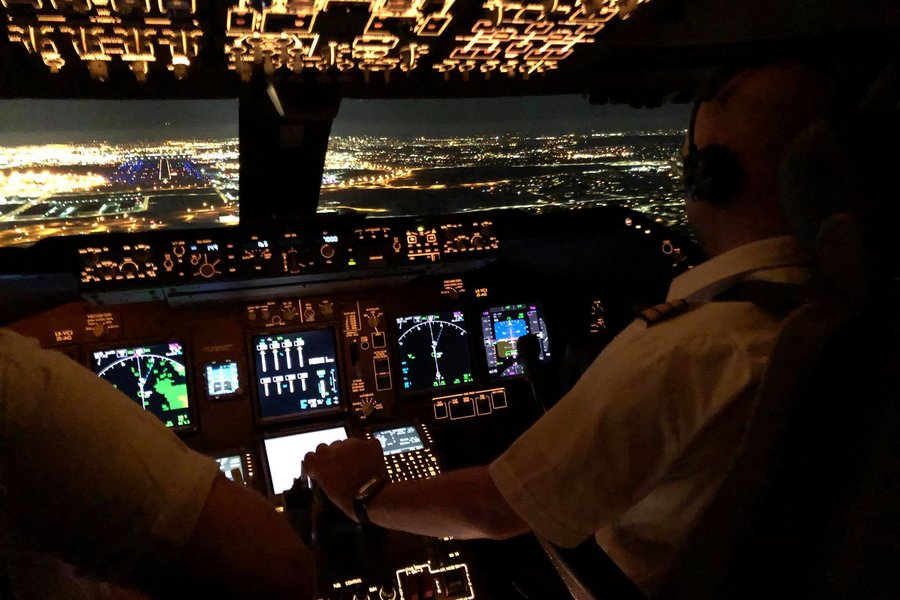 What a nice last trip it was. Enjoying the city of Seattle for a few days and as fortune was on my side, I met a couple of old Transavia-colleagues that were there by coincidence to pick up a brand new 737 from the Boeing factory. Joining them for a dinner and drink, it felt like a little reunion, with lots of catching up and talks.

But all good things must come to an end. As it was my last trip with Cargolux last week, my two colleagues allowed me to fly the last two flights from Seattle to Calgary and onward to Luxembourg as Pilot Flying. My last two manually flown landings with this company.
The first leg Seattle – Calgary took us over the Canadian Rocky Mountains with the moonlit snow-covered peaks passing below.
Silently enjoying the view, I made a gently descending turn around the city and lined up with runway 17R for a last landing in Calgary. At least, for the foreseeable time.
This photo was taken by my friend and colleague, Marc Elsen, who definitely made the last trip a fun and memorable one. Thanks Marc!

The last leg to Luxembourg was a fact and during our descent through The Netherlands and minutes later Belgium, I was even surprised to hear Brussels Control asking over the radio if 'Christiaan was on board?'. A goodbye and wishing me the best in the rest of my career from the Air Traffic Controller that is following me on social media and knew this flight through his airspace was my last one. Thank you, that really made my day!

After parking the plane on the apron in Luxembourg, I switched on my phone and was overwhelmed by an unbelievable flow of messages.
Lots of people have wished me good luck with my future endeavors and even more people asked me if this is the end of my photography or posts:

Fear not, my friends; I will never give up on my photography and much more is to come in the future so stay tuned! :)

Just as many people have asked me what Im going to do now and where I'm going to fly next?
Well first of all, Im going to enjoy a few weeks of sleeping in my own bed and catching up with some friends. After that.. I'll continue flying the 747 again but with a different airline.

Many people have asked me where; Cathay Pacific Cargo, AirBridgeCargo, CargoLogicAir, China Southern, Henan Cargo, Silkway West, Martinair, KLM, British Airways or perhaps UPS?
A couple of those have approached me with some very tempting offers, but in the end one of them had the best package so far and I'll be proud to make it public when I join them in a few weeks.