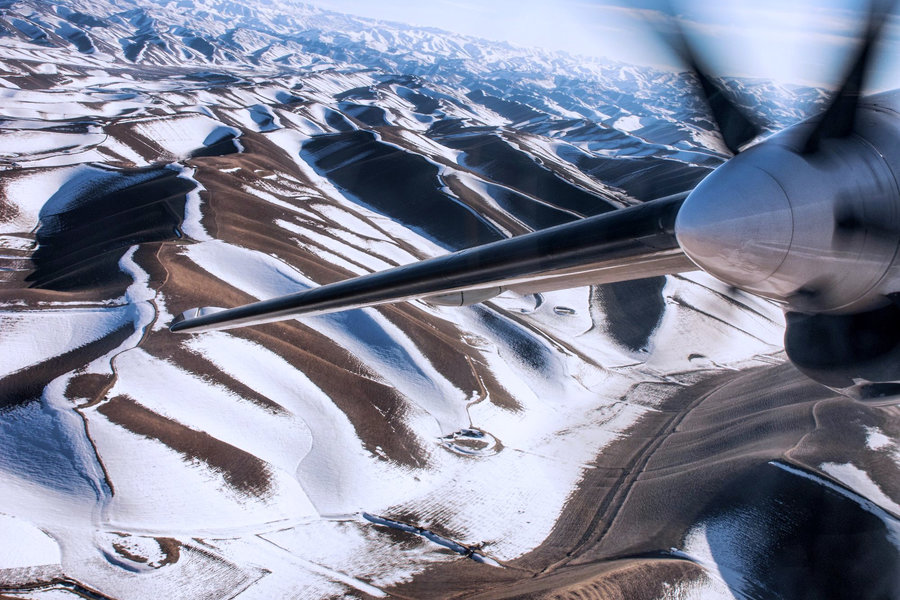 With winter all over the entire Northern Hemisphere, it reminds me of the adventures a long time ago, in a country far, far away (for most of us). Flying for a small company that no longer exists anymore, I was a contractor in, among other shady places, Afghanistan.

Based in Kabul, there was one tiny little white bird that flew all over the country, weather and hostile activities or not. At times naive and ignorantly flying into the most remote airports and ditrtstrips.
Our operation was quite straight forward; every monday a huge transport from Europe would arrive into Kabul and we were responsible for making sure that all of the people and its cargo would be delivered around the different bases before the next transport would come in. Especially in the beginning we had total freedom to come up with our own schedules and trips as long as we made sure the job was done, and we managed to deliver nearly all of the times.
No wonder our unofficial company slogan was 'Anywhere, Anything, Anytime'. And we made it happen.
From the most shady and forgotten corners of the Congo to Afghanistan and the Western Sahara. We flew our passengers and cargo to the places our customers demanded, no questions asked.
More about this chapter once I can find the energy and time to write about it all properly, since those stories simply deserve to be told in a better context.
The operation in Afghanistan gave us the total freedom to get the job done and only now, in retrospect, I can appreciate these adventures in their full glory. Since we had one of the lowest priorities for resources like fuel in a big military base like Kabul, we managed to find some fuel contractors in the outstations, mostly local Afghans, that would refuel our planes by climbing on top of our wings or finding makeshift local forklifts that would do the job.
Flying wise, the operation was completely VFR; meaning that we flew by Visual Flight Rules.
In more common terms; navigating purely by eyesight and finding our way by following visual references like roads, turning left by the second village, third indistinguishable peak to the right, a bridge over that old dried up river. Follow that valley and when you see an old burnt Soviet T-62 tank right off the road you'll know you're on the right course. Stuff like that. Good times.
Tour of Duty music blasting through the speakers while we're flying with 300-350km/h at treetop (or better said camel-) level over villages where its inhabitants maybe never even knew the Soviets left the country nearly 18 years before. Finding our way with visual clues that were sometimes hard to recognize, to say the least.
Never fly through the same valley in a predictable fashion was the main advice, for the locals might welcome us with some traditional fireworks coming from their poppyfields.
Great fun and games while the weather was nice, but imagine you're suddenly running into heavy weather, mist, dust storms or anything else that blocks your forward view. Or ice that builds up on your wings and propellers and reduces the already limited airplane performance.
You better know where those mountains are or you'll end up in one of the statistics as just one of the many CFIT (Controlled Flight Into Terrain) crashes that make Afghanistan one of the most dangerous countries in the world to fly in with so many planes getting lost, adding yet another lost aluminium carcass to its mountain slopes.
Nonetheless, I hardly ever dream about flying at all, but the few times I do I often find myself flying low-level over Afghanistan again. Gliding over the mountains and hills just south of Mazar-e Sharif, seeing the steep rises of the wind-battered Hindu Kush mountains or the visual handflown approach into Kabul on a clear spring morning. Total freedom, observing nature in a nearly 360' view and gliding over the pristine raw beauty of Afghanistan.
The landscape where I can still mentally paint out every peak, road and river by memory. A peaceful feeling of floating over one of the most beautiful landscapes I've ever laid my eyes on.
Maybe I'll return one time. Until that day, I'll think back about those days with a smile on my face and enjoy the views from above today from my 747.