A first real try with my new Nikon D850 camera to see if it would actually do a better job compared to my 4 year old D800. Flying over the Pacific Ocean, hundreds of miles away from landfall and not even the slightest bit of moonlight to illuminate the world and clouds beneath us. Just the light of the stars and the faint earth glow from the atmosphere. 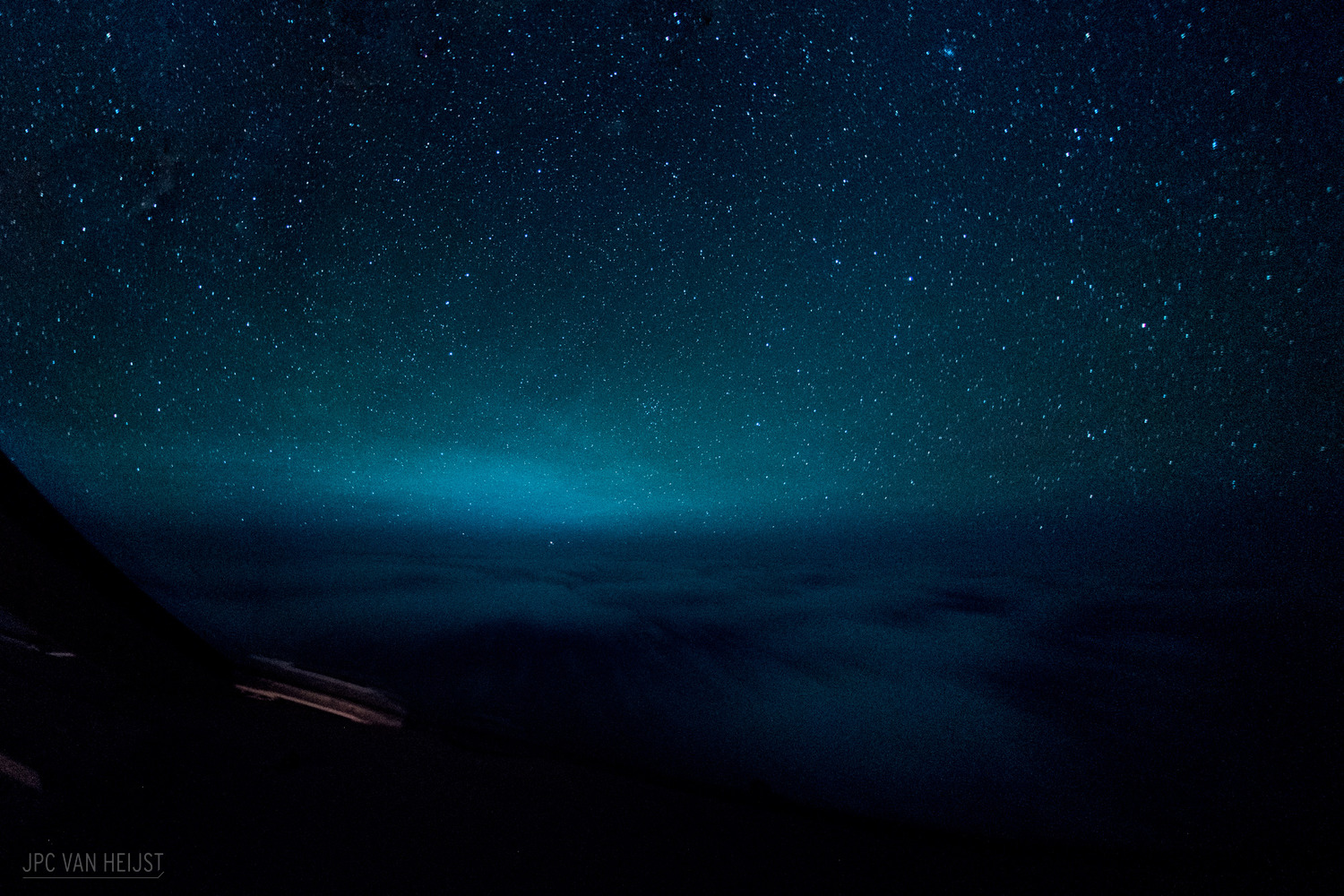 Apart from the technical side of this photo, it always surprises me how much light the stars alone actually give. When flying so far from any man-made lights like cities or roads on the ground, it's incredible what you can see when you let your eyes adjust to the low level of light. All the lights in the cockpit dimmed to the lowest level and let the eyes adjust for at least 30-45 minutes and you'll start to see the contours of the clouds and other faint features just by the light of the stars.
It always reminds me of the breathtaking stories of WW1 (bomber) pilots who were sent up into the night sky. Just a few years after the first manned flight, young men were sent up with no knowledge about spatial disorientation, navigation or aerodynamics, except for a few costly lessons in the months and years before.
In the beginning they were mere suicide missions and the pilots were not expected to survive the perils of night flights. If they managed to come back and on top of that land the airplane instead of crashing it somewhere in the ground, it was a nice bonus. Without any means of navigation except looking at the ground and trying to 'keep the stars above', many actually started to manage and found they could actually see a lot of features on the ground simply by using the light of the stars. Coasts and rivers became easily recognized and after a while even landing without the help of any lights or guidance became relatively easy using nothing but the light of the stars.

For this shot, I used the Nikkor 10.5mm f/2.8 lens and placed it on the glareshield in front of me, just against the window. A 20-second exposure, aperture f/2.8 and an ISO (sensor sensitivity) of 2500. The result is stunning and beyond my expectations.
This photo has not been enhanced either in photoshop or by noise-reduction, it's just coming from the raw file as it is.
The D850 can go up to much higher ISO values, but I specifically wanted to see what it would do under settings I normally use on the older D800. The amount of visible stars is just incredible and I can only imagine how the camera will do under other conditions like the northern lights or the moonlight on snow-landscapes, where I definitely needed shorter shutter times and higher sensitivity. Here I was pushing against the limits of the old D800 and I can only hope that the new D850 will be able to capture it.