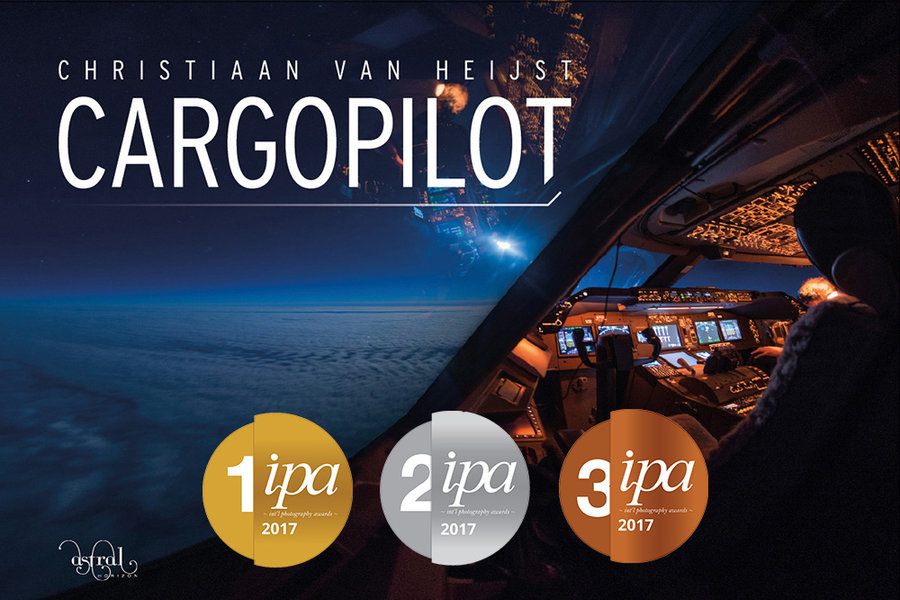 Im happy to announce with a modest amount of pride that my first book 'Cargopilot' has been awarded with 3 prizes in the IPA International Photography Awards 2017! First place in the 'Other' book category, second place for the 'Monograph' category and third place for the 'Documentary' category.

Absolutely fantastic news and I'm overwhelmed with the positive feedback about the book since it was first published December 2016. The pre-orders were going through the roof since the first moment I announced the first print of the book and there seems to be no end to it.
Now, not even a year later, we're about to start the production of a third print since the book is almost sold out everywhere a few months after the second print landed in stores.

Cargopilot is a 200-page heavyweight luxury coffee-table book that features a wide range of photos that convey the life and views of a Boeing 747 Cargopilot with pictures that vary between landscape, airports, weather and technical fascinating views of such a world-wide operation.

A big thank you to Simon De Rudder who was responsible for the design & feel of the book (and later my website). He is one of the very few people that I allow to work with my photos since he 'understands' the context of the images and feeling for each chapter. A gift not many people have, thank you Simon!

Also Charles Kennedy that came up with the idea and inspiration of the book, encouraged me constantly and gave me practically a 'green light' to come up with whatever I thought was going to work. He published the book after we were all happy after countless of long nights and fine-tuning from all sides.

And of course Flevodruk Harlingen, the Dutch printing company that prints the book under the inspiring leadership of Jurgen Drost who proved to be a good friend since and has helped me along in setting up my photography career with endless enthusiasm and energy.