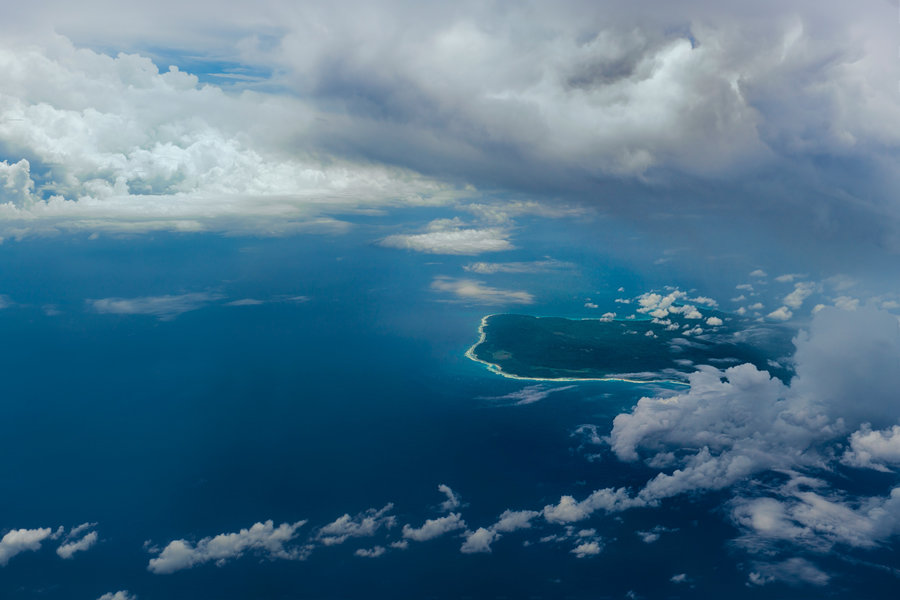 Partially hiding in clouds, this island lives up to its mysterious reputation and name, even from high up in the air. It looks as a typical idyllic island, just like so many others that are littered in the Indian and Pacific ocean. But in reality, its one of the most dangerous and least-visited places in the world. Located south in the Bay of Bengal, between India and Malaysia, it is part of the Nicobar Islands. No airways or flying routes are planned over this island, but due to some very big thunderstorms over the Indian Ocean, we were forced to divert for a few hundred miles from our original course and found ourselves overflying this unique spot on the globe that was hiding in between the clouds.

Surrounded by spectacular white sandy beaches and coral reefs in turquoise waters, the island is entirely covered by dense jungle. A forrest that hides one of the last truly indigenous tribes that have so far been able to live all by itself and reacts extremely aggressive to all outside visitors.
First noted in the 1700's by a British East India Company oceanic surveyor ship that simply sailed by, the island was only visited again a hundred years later and only sporadically since.
So far, all visitors (with one exception) have been attacked and many have been killed while attempting to make contact with the inhabitants that are guessed to be between a dozen and a few hundred people.
Estimations state that humans started living here since roughly 60.000 years ago and have been largely without contact to any other people, including nearby islands, ever since.
Researchers even found that the tribe uses arrows without feather vanes, a simple adjustment that people on other nearby islands and all over the world used for over ten thousand years already.
Also, tribes from nearby islands do not understand the language of the Sentinel-inhabitants, leading to the likely conclusion that inhabitants of Sentinel Island have been without outside contact for an extremely long period of time.
This very solitude and defensive attitude is probably also the reason why they are still able to survive in the modern world without dying out or disappearing as so many other isolated tribes have been in the past century.
For as long as that solitude lasts of course, since it only takes one 'tourist' to bring a modern disease like the flu or a simple cold onto the island that will most likely have catastrophic results for the people living here. Not to speak of modern technology and culture to arrive here and spoil the mindset, culture and people here for good.

Seeing the island like this makes me feel as if I'm flying over a tiny human zoo, a piece of history that decided to be left alone and survive, against all odds. Lets hope it will remain like this for a long time to come.