Somewhere over the Atlantic between South-America and Africa we encountered a huge front of active thunderstorms. Flying in thick clouds with zero visibility, we had to rely on our weather-radar to get a clear image of the weather ahead. It was obvious that there was no way to fly all around this squall line of entangled thunderstorms that stretched across our route for hundreds of miles to either side. 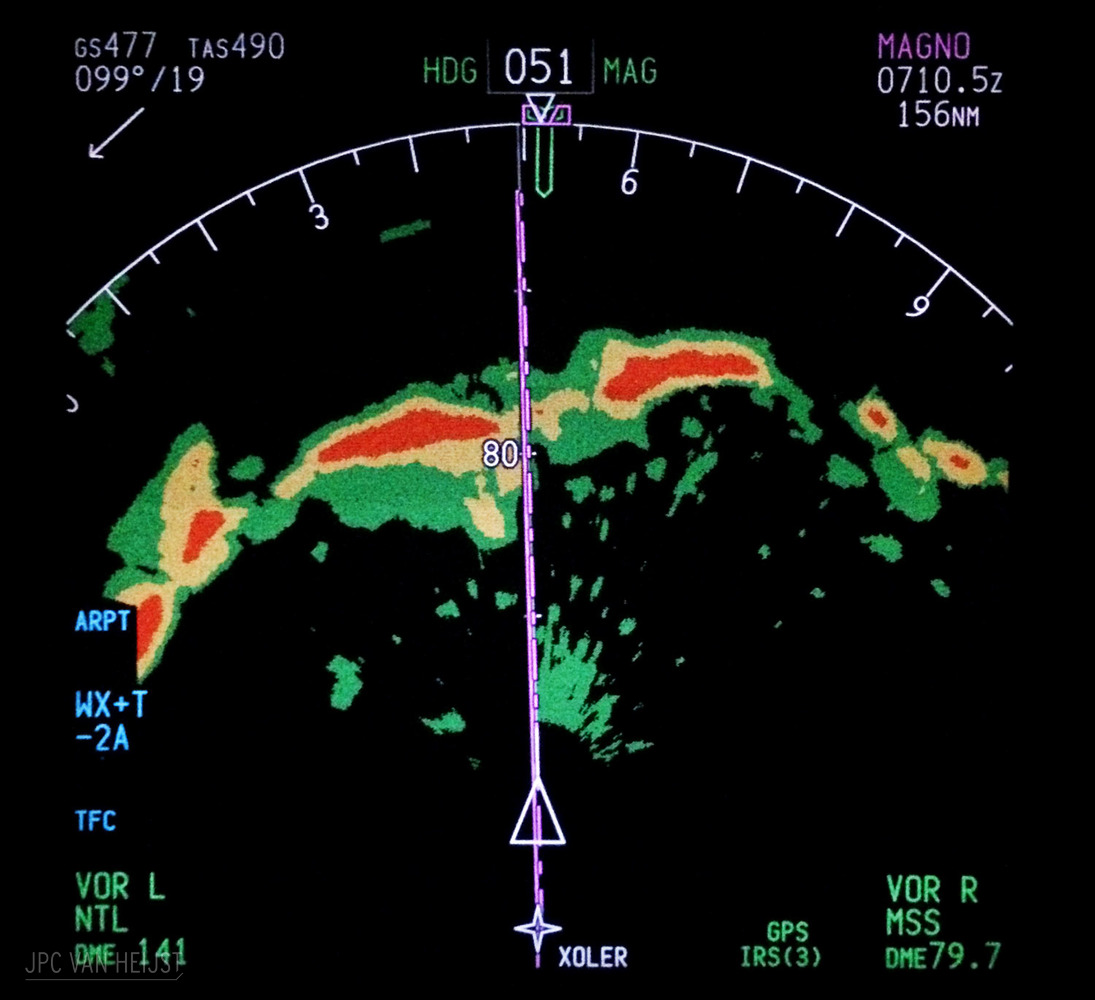 Coming closer, the radar provided us with a more detailed image of the interior of the clouds ahead, enabling us to plan a route through this maze of violent weather. This time though, we immediately understood that we wont get away with a smooth passage. The storms had almost grown together into one, forcing us to find the 'least' violent spot to fly through.

Our long range HF-radio was already rendered completely useless with the nearby storms that charge the atmosphere and our airplane, thereby blocking all signals to and from the outside world.

Speed reduced to the 'turbulent air penetration speed', engine ignition selected to 'continuous' to reduce the chance of engine flame-outs, and hoping for the best while we guided our 747 in between two big red spots on the radar, reducing the chances of encountering heavy turbulence and hail.

Suddenly the air around our airplane seemed to turn dark blue and purple; but actually it was our own airplane that was starting to glow ever stronger. A plasma of purple and pink surrounded the fuselage, wings and engines and created a surrealistic atmosphere. The rims of the windows suddenly start to glow bright and the first sparks dance over our windows, growing in frequency fast.
A phenomenon that is called 'St Elmo's Fire' since it appeared on ship masts and sails nearby thunderstorms and religious sailors often thought it meant the presence of St Elmo to assure their safe passage of the storm.
It is even said that on the night before Columbus first discovered land, his ship was accompanied by St Elmo's fire during the night.
In general its regarded as a good omen and completely harmless for the object it is manifested on, but in these situations it is a clear indication that we're flying in heavily charged clouds and a lightning strike could be imminent.

I've seen various forms of St Elmo's fire inflight so far, but this type with sparks over the windows is by far the most common. Just recently I saw something that was completely different; the airplane was glowing heavily but no sparks appeared. Instead, it seemed as if there were huge beams of purple light shooting from our airplane into the air ahead while we were tossed around in the tops of a thunderstorm. A very eery and uncomfortable sensation that did not last long enough to capture it on camera, unfortunately.

Then, just as sudden as it started, the sparks disappear and the glow faints out as we reach the other side of the front. Not even a minute later the radio is working again and the first stars start to reappear in the sky above.
Time to put my dinner in the oven.