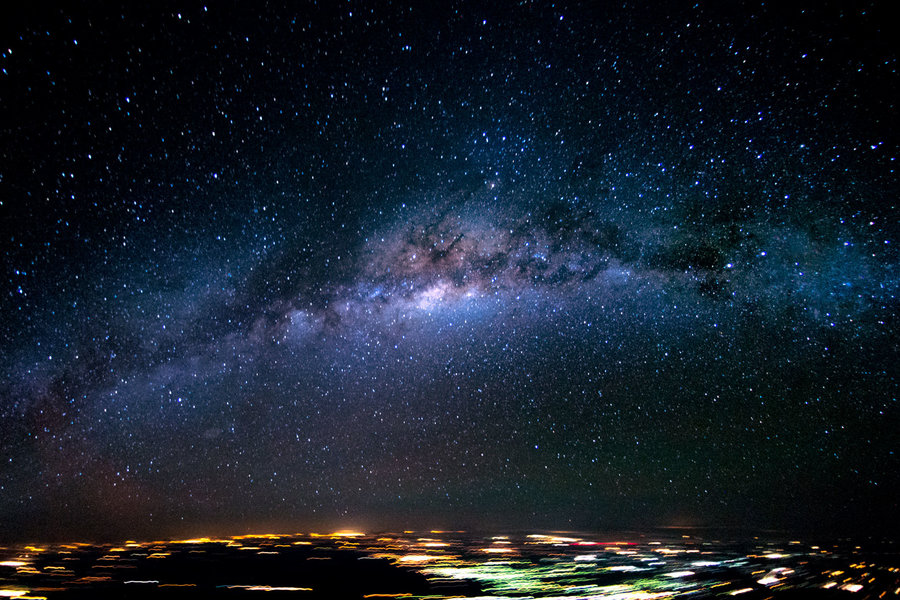 Stars. Billions. Hundreds of billions of stars. The longer I let my eyes adjust to the lack of light, the more of them I begin to see. A broad band of dim light, also called the Milky Way, starts to show in the sky above. With no moon or sun to ruin our night vision, we're able to see the amazing and inspirational view of our own galaxy, our relatively local 'city' in the universe.

Our planet Earth is part of our solar system with the Sun in its centre and the other planets (like Mars, Venus, Saturn and many others) circling around her. Lets consider this our 'street' where planet Earth is our house.

Our street is located in one of the suburbs of the extremely big city called the Galaxy; a huge spiral group of (guesstimated) between 100 and 500 billion stars alone. Our Galaxy, which is actually one of literally countless trillions of local 'cities' in the entire observable universe.

Since a few years we can generally state that nearly every star has one or multiple planets. Using simple math, we can easily state that there are at least 500 billion to 4 trillion planets out there, in our very own Galaxy. In this simple photo alone.

Sure, most of them are probably like the majority of all planets in the universe; extremely hot or cold, gas planets without surface or equally inhospitable for life as we know it. But of all those trillions of planets, there might be a just a few that could generate conditions that accommodate life as we know it on Earth.

Knowing our Galaxy is roughly 13 billion years old and our planet Earth formed about 4,5 billion years ago, there must be literally countless of planets that are millions or even billions of years older (and ahead) of us.

I will leave the implications of those numbers up to you, but when Im simply looking up into a night sky like this, it makes me wonder what else is going on there and what's out there, far beyond our observations and knowledge.
I will be the last to proclaim that whatever is going on there is purely peaceful, loving and forgiving that the universe has to offer. Nor will I even claim that there is life out there at all since we simply do not know how unique or common 'life' is. But the ideas alone are mesmerizing.

Other factors that are interesting to study are the likeliness and the science of 'life' emerging out of lifeless matter. Its still a mystery how the first basic forms of life emerged and with this huge question mark still in place, we can only guess about the chances of life emerging somewhere else with similar (let alone vastly different) conditions. Our only example of such a case of spontaneous emergence of life is life on Earth, and this makes us extremely limited in our knowledge and understanding by definition.

Maybe fortunately for us, the distances are so extreme that communications with any potentially advanced civilization or species out there (if there are any) are very unlikely. Possibly limited to ancient probes and drones that were sent out millions of years ago by civilizations that are likely died out by now or are unreachable by their sheer distance. Taking into account how fast (unmanned) technology has evolved here in the last 100 years already, I think probes and other unmanned encounters are the most likely in comparison by manned UFO's with green mean men.
And maybe that's a good thing in case 'they' are (or were) as hostile as we as a human species have proven to be in history. Judging from our limited knowledge of biology and psychology; the species that manages to grow into a powerful dominant species on a planet is also the most destructive and offensive by nature (otherwise they/we would not have dominated by definition).

Or maybe we're missing out on some wonderful enrichment of life and consciousness by not exchanging information with other civilizations that would make us grow in ways we cannot imagine.

Then again, the thought of this vastness, this endless space and time where we have a place... might be completely lifeless. Empty. Nothing. Useless.
No consciousness or soul to see the beauty or witness the countless sunsets, aurora's or shooting stars. Not one single place where music is heard, love is experienced or laughs are echoing among good spirits. Nobody to read the stories we wrote or the culture and knowledge we left behind.

We might be alone in this extreme vastness that has no meaning, no purpose and no goal. Just us on our blue marble and nothing else until the entire universe ends in a complete cold void or collapses into nothingness. All history and knowledge lost either way.