On our route to Brazil, we were flying over the Atlantic Ocean for almost the entire route. Midway between Africa and South-America, we were enjoying an illuminated roof of billions of stars and one of the brightest Milky ways I've ever seen (photos will follow soon). We dimmed the cockpit lights and enjoyed the simple beauty of flying on such clear nights, far away from any light pollution. While both of us were gazing at the spectacle of the moonless sky above with a warm cup of coffee in our hands, our conversations soon moved to the meaning of life in such a vast universe, the (im)probabilities of alien life and the photos of the red lights over the Pacific I took in 2014. 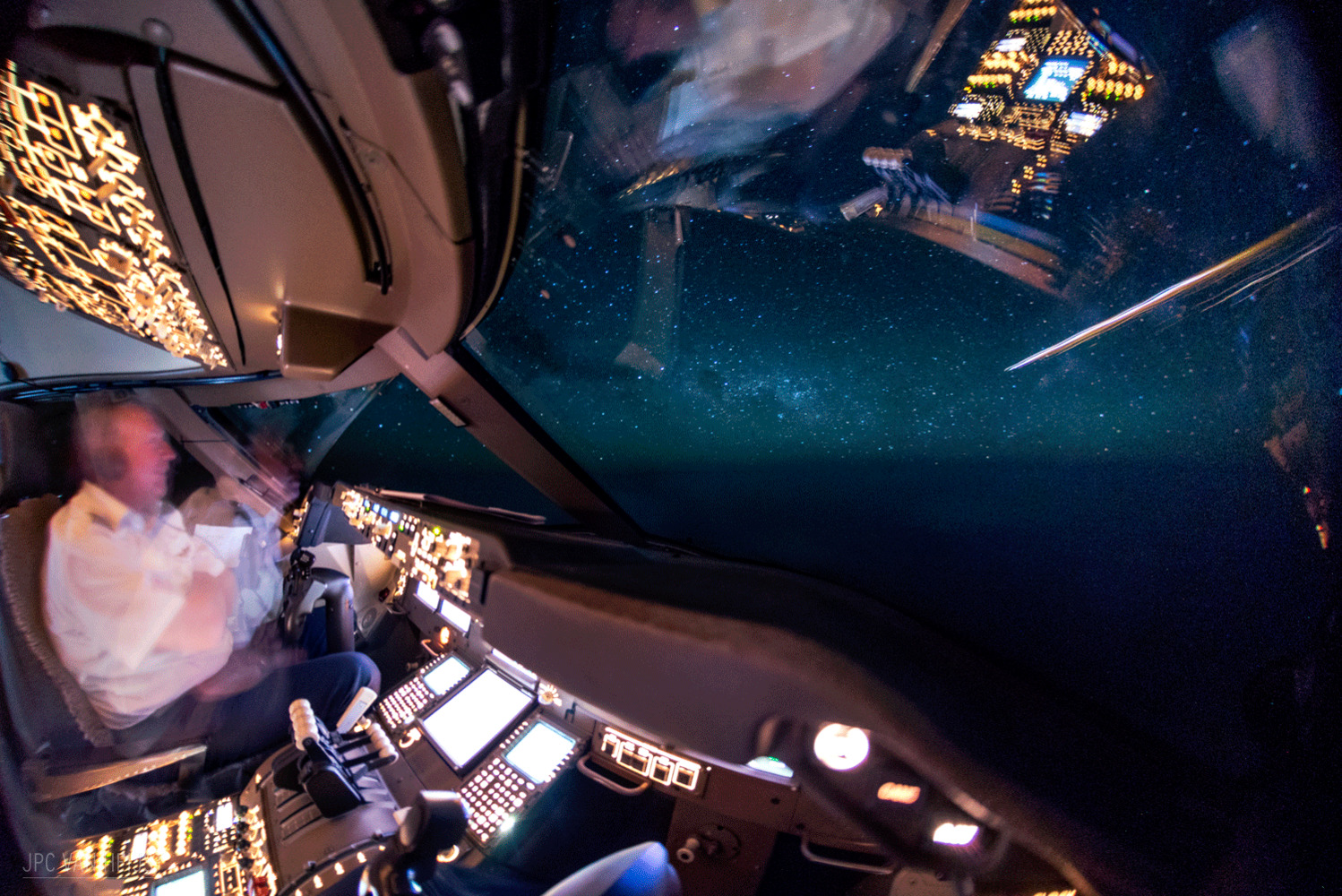 Suddenly I noticed something in the corner of my eye. I looked to my right and to my own surprise I saw a huge group 7-10 of bright yellow lights move parallel to our track with a much faster speed and very high altitude. This was not an airplane, nor was it a meteorite.
Where shooting stars / meteorites often leave a bright trail, they move with very high speed and burn up quickly. This cluster of lights moved far too slow to be a meteorite and its light was far too constant to be an ordinary meteorite.
Immediately, a lot of excited chatter in Portuguese and other (African) languages I could not identify was opening up on the frequency we had tuned in. Apparently lots of pilots were seeing the same lights, which is not surprising with such a high and bright appearance.

All in all, the lights appeared abeam our aircraft and disappeared on the horizon in roughly two minutes time, keeping their intensity and appearance along the way. In the 15 minutes that followed, a few very slow 'shooting stars' appeared in the same path, suggesting it might be more debris that followed the large chunk of a disintegrating rocket.

We had a look at our NOTAMS (a long list with information, warnings, airspace closures, amendments and changes that affect the airspace and airports we pass through).

To our surprise, there was a large area in the Atlantico SBAO FIR closed because of the falling of rocket fragments from the Soyuz VS17 missile.
Roughly translated it says that somewhere between the 18th and 28th of May, there might be rocket debris falling down. The predicted crash-area was just 60nm-110km abeam our route last night.

From what I could read on the internet the Soyuz VS17 was launched the 18th of May and this could very well be the debris we saw last night.
Unfortunately I only did not have any time to switch lenses or make a movie, since I had my fisheye lens attached to my D800 and only had time to take 3 quick shots. The photos are with 25 second exposures each.

Maybe there are some experts among my followers with better and more information regarding rocket launches and the return of space-debris that took place last night?

I'm happy to hear any suggestion what else we might have seen and how long it takes for a typical Soyuz rocket to return into the Earth atmosphere.

My recent sighting of the great fireball over the Atlantic Ocean has been picked up by a few scientists and experts that came to the conclusion that what we saw was the 'uncontrolled re-entry' of the Chinese CZ-4B r/b 2014-049C Chang Zheng (Long March) upper stage rocket that was launched in 2014.

Because of the unpredictability of such re-entries, no notams or airspace-closures are issued since it's nearly impossible to precisely predict where this space-debris might come down.
Even though most of the debris burns up in the upper atmosphere during the re-entry, certain compact parts are likely to survive the burn and reach the surface.

All in all, we were just in the right time at the right place, witnessing the enormous fireball that appeared probably just seconds before I caught it in the corner of my eye.
Though I was extremely lucky to witness this spectacular show, I find it quite a scary idea that so much space-debris is falling back to earth uncontrolled, with the risk of getting hit by some small parts that fall from the sky.
Well at least we still have the pictures.

Thanks Marco Langbroek for your thorough analysis!

Following two images are made by and property of Marco Langbroek:
https://sattrackcam.blogspot.com.br/2017/05/analysis-re-entry-of-cz-4b-rb-2014-049c.html

The first image shows the path of the space debris and its exact time, relevant to our position in flight during the sighting.

This second graph shows the relative altitude and visibility of the falling rocket debris in relation to our position and altitude.