Turbulence over the Himalaya (5 minute read) 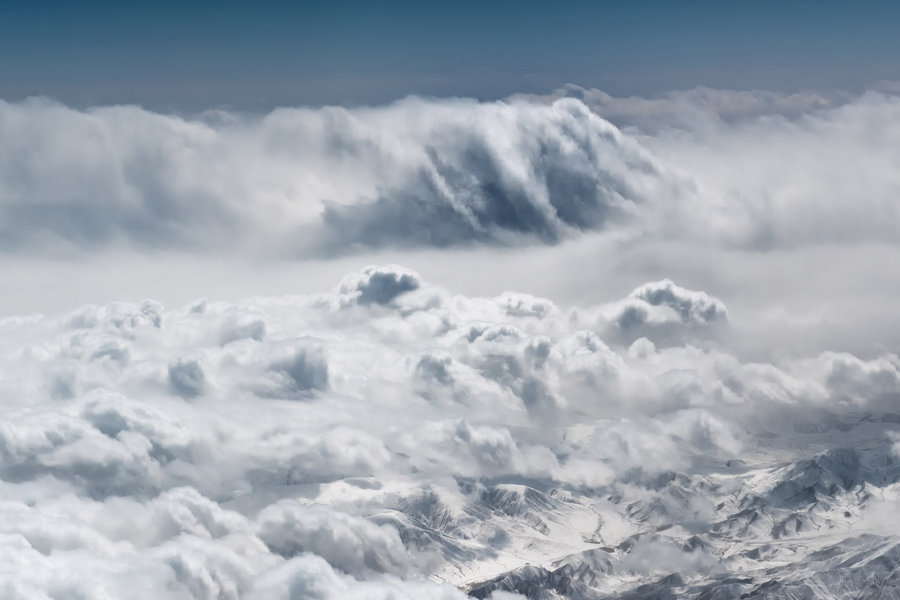 After joining Cargolux, I had to wait at least 4 years before I could finally fly the Y1-airway over the Himalaya Mountains; but recently I flew this route 5 times in just 10 days time. I was lucky for we had a few beautiful days with crystal clear visibility, a delight to enjoy the unique views and landscapes below. Another flight gave us a magnificent sunset that made the snow-capped mountains look like they were glowing with fire and a few flights where clouds partially obscured the impressive and unforgiving landscape below.

Last crossing was different though. Heavy winds up to 150kts/280kmh pushed large masses of air over the rugged terrain below. The high peaks and mountains force the air to flow up in the stratosphere with tremendous speed and power, causing heavy turbulence for a few hours on end during our passage over this remote corner of the earth.
The heavy winds blow masses of air and clouds easily up to 60.000ft and beyond, much higher than our cruising altitude; making our Boeing 747 a mere feather blowing in the wind.

This flight reminds me of the countless times I’ve been told by people that have experienced ‘turbulence’ as a passenger. How they described sheer terror, near-death experiences and those fearsome fictional ‘air pockets’ during what they thought was their final hour. Sometimes not knowing I was in that same cockpit and could, to my most pessimistic abilities, describe those weather conditions as occasional light-to-moderate turbulence.
The type of turbulence that makes some pilots so weary they want to close their eyes for a few minutes, or make others slightly annoyed because they cant read their magazine.

Apart from that, I’m always impressed with how many passengers experienced those feared air pockets that let the aeroplane drop from the sky for hundreds of feet/meters. Amazing stories, especially since I have never experienced this with my thousands of hours aloft. Sure, I’ve had some serious turbulence close to the ground when the strong wind was blowing over some ridge or mountain close by, and a few encounters of heavy turbulence higher up in the atmosphere where afterwards the coffee was dripping from the ceiling. Those incidents happen to me once in roughly every 4 years, being a full-time airline pilot. But strange things like the aeroplane suddenly falling from the sky? Never.
Fortunately, most people wont ever experience any moderate or even severe turbulence, and that’s a good thing I guess, since even a modest tremble seems to ignite an unfair amount of fear for those in the rear.

In recent years I did learn not to explain my vision of those so-called air pockets they experienced during their holiday charter flight that year. Apparently it can trigger quite some anger and aggression when a pilot, who works in the air and has to understand its very nature and dangers, tells them that their heroic survival story was nothing but having the sensation of falling, while the airplane was just dancing on a few ripples in the air. Their story probably causes quite some admiration among listeners at parties and among colleagues in the office, so when someone else tells them it was nothing special, who better to direct your anger to than the person that wants to take away that special story.
Now I just smile and say I’ve never experienced it myself, leaving vulnerable ego’s undamaged.

Today will be a rough one though, for our lonely freighter that’s cruising above the world’s highest peaks will be struggling through strong mountain waves and updrafts.
Warned by Chinese Air Traffic Control and other aeroplanes ahead, we knew that we were up for a rough ride ahead. I went to the back and made sure all lose items in the upperdeck were fastened, the galley was secure and our few passengers were correctly strapped in. Back in the cockpit again, I buckled up for the roller coaster ahead. We adjusted our airspeed for the recommended turbulence penetration speeds and waited for the turbulence to begin.
A pleasant soft rumble in the air suddenly changed into a barrage of violent hits on our aeroplane from an unknown assailant. As if the weather gods themselves descended down to earth and decided to punish this metal bird for trespassing their holy grounds.
Violently thrown across the sky as if we were an autumn leaf in a storm, I see our altitude and airspeed change at an alarming rate while the automatic pilot is doing its best to regain all parameters within safe margins. At times, the instruments are unreadable and I can only imagine the stress on the engines that swing passionately underneath the tormented bending wings. During flights like these I have a growing admiration for the design and engineering skills from aeroplane manufacturers.

A few times I wonder how much stress those engines can handle before breaking off their joints, being designed to separate themselves from the wing if the stress gets too strong. Today, the forces of nature certainly seem be a likely candidate to test their strength.
To my surprise, the engines keep running at a smooth pace, not even an indication of excessive vibrations in their moving inner parts or change in the exhaust temperature. As if its business as usual, the aeroplane ploughs through the unstable air and then gets spit out of the turbulent jetstream somewhere south of Beijing, like a ship that is sailing from a hurricane and finds itself suddenly into a smooth and calm ocean.

The only damage being a bit of coffee-spillage in the galley and one pale and blushing passengers asking where he can dispose his filled up disposal bag with liquid fluids.
The aeroplane can easily handle those conditions, but personally I prefer the quiet sunsets over the snow-capped peaks.
And I think our passenger today would agree with that.