Christmas over the Himalaya 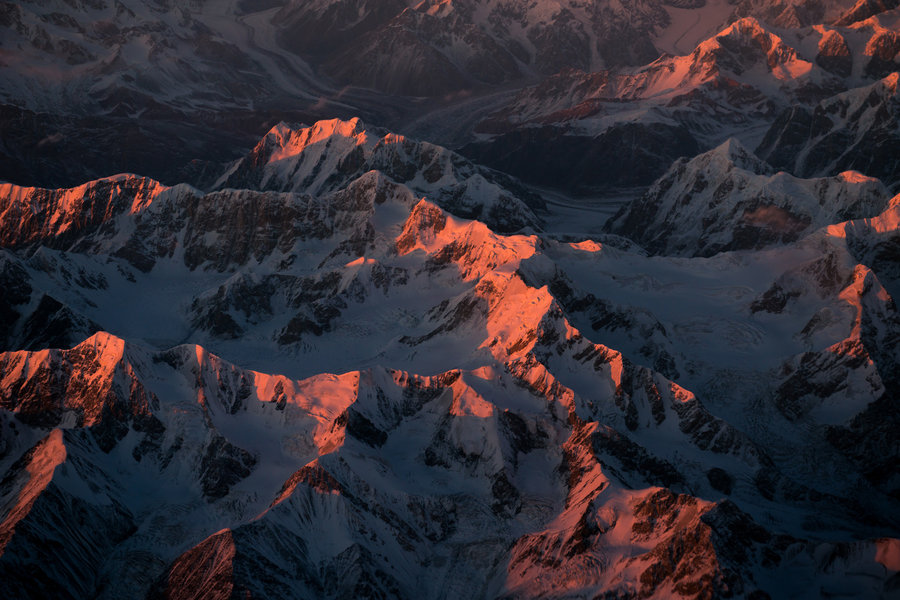 Ping! My phone lights up and tells me the joyful news of a new schedule change. After a few busy and fully packed days at home, I'm unexpectedly leaving half a day early. A few uniform-shirts are thrown in my suitcase, a pair of random socks, some underwear and together with the clean clothes that were in there since last trip this will have to do for coming week

While driving to the airport I think of all the things I wanted to do but havent had the time for... well they'll have to wait until I'm home again; nothing that will prevent the world from keeping on spinning. This is one of the months of the year that our company is making money and its part of the job.
With a bit of luck I'll be home just before Christmas with two days at home, something that hasn't happened in many years. Lucky me.
I'll have to miss my brother's birthday for the seventh year in a row now.. a real pity, but most of my relatives are already used with me being not present on birthdays or with the holidays, unfortunately.
Leaving one day earlier and instead of going to Dubai, Im finding myself flying to Beijing.

One long night-flight later, we arrive in Beijing... the air pollution is rated 'hazardous' and I decide not to leave my hotel this time. Locked in my private luxurious prison, in a country where social media and my email-account are blocked, I try to read a bit and sleep.

Schedule change! ; Flying in the morning as passenger to Hanoi to pick up an aircraft there. Not via a direct flight; that flight is fully booked by now. Via Hong Kong to Hanoi with a quick sprint in between flights halfway the airport. A young child behind me is screaming loud and kicking violently against my seat for about 4 hours straight. At least 15 minutes of deep sleep in between the kicking&screaming-sessions. So much for the benefits of flying business class.

Minimum rest in Hanoi; we fly our own plane to Hong Kong and arrive in the middle of the night in our hotel. Not that it really matters; my biorhythm is all over the place and with a few hours of sleep here and there my body finds the rest it needs. No idea how long Im already on the road... if you'd tell me I'm gone for two weeks I'd just as easily believe it as anything else. Turn my phone on; 50+ new messages/emails... an instant headache begins to emerge. Not now please; I just need some rest. I'll answer when I have time and space in my head. Whenever that is.

Schedule change! The next trip is changed; after minimum legal rest at home I'm flying out again to Singapore on the 25th in the morning. That means a real quick visit to only one of my parents and just enough time to exchange some laundry with clean clothes. Sorry mom!

Friends ask me if I'm home with New Years Evening. I have to answer that I have absolutely no clue.. just like last years.
I might be home, but I might also fly anywhere over the world. My official offdays begin only somewhere in the first week of January and until then, I'm at the companies disposal.
Not that it really matters to me; I don't care too much about the holidays anyway. But making plans for these days with friends or family is nearly impossible. Im fortunate that my real friends understand this and don't blame me for the uncertainty that it brings, or the fact that they might not hear from me for a while.

Today's flight; Hong Kong to Baku. While we blast off the runway with full thrust, carrying a load of Christmas toys from their factories to the European Christmas trees, our Red&White sleigh thunders through the nearly-empty skies. Once in a while, an anonymous Santa Claus yells over the frequency 'ho-ho-ho...' though he's nowhere to be seen and consequently summoned by local Air Traffic Control to keep quiet because he's talking on an active frequency.
A nearly 9 hour flight through China, over the Himalaya and further West over Central Asia. The first part of the flight we're busy with a small technical issue that, in itself, is harmless but could potentially have major operational consequences and cause a major delay for our and the next flight. With support from Chinese Air Traffic Control and mostly from our knowledgable mechanics in Luxembourg via satellite telephone, we manage to solve the issue before it has any major effect on the operation. Any delay could cost the company enormous amounts of money; something we will try to prevent no matter what, especially this time of the year.

Then finally, after 3,5 hours, we have time to relax, settle down and simply enjoy the view for a while.
All this time we were so busy that we nearly missed the fact that we are literally chasing the sunset over the roof of the world. Now, with the meals heated up and a fresh coffee brewing, we become spectators of an almost 5,5 hour long show of orange, purple and yellow colors over the snow-covered Himalaya.
A view that seems to be all for ourselves and of such a divine nature that we hardly dare to speak up; afraid to ruin the magic that seems to be casted there for our eyes only, interrupted only by the occasional hand-over over the radio when crossing the invisible borders of the countries that pass below.

Even with the constant changes, the lack of rhythm, sleep and the missing-out of family-events and holidays, this is a view that cannot be captured even by the best camera or most carefully chosen words. Nor would I ever want to change this for any other job in the entire world. This very view makes up for all of it.
No matter now often I hear from souls that never troubled to take risks in life and follow their dreams; that my job is a 24/7 vacation or with the uninformed and cynical 'everything is automatic in aircraft', I pity those who try to take down others to make themselves feel better.

Descending through 4000ft over the Caspian Sea, the wind begins to shift abruptly and the forecasted heavy gusts, that will continue all the way to the ground, shake our bird violently.
Landing by hand in those conditions makes pilots smile.. and so did I tonight.
Just one more hour in heavy Baku evening traffic towards the hotel and find my bed.

Time to go home, even if just for 24 hours of Christmas.